It's a Wonderful Tattoo 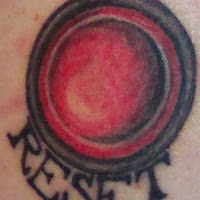 For Christmas, my wife, Jenn, told me I could get another tattoo, my second. I have wanted another one for years. My first one was a "reset button," designed to look the the "fire" button on the old Atari 2600 joysticks. I got that one in 2003 or 2004 after my divorce to remind me that I am in charge of my life and my future, not my practice wife/mother of my first child.
I have wanted a second tattoo for years, and have kicked around the idea of a Wonderful Life-themed tattoo for a while. I thought about the drawing of George lassoing the moon, but among other reasons, I decided not to do that, because that seemed to be the go-to design. I wanted something unique. And I wanted to incorporate my children in some way. So I went back to the drawing board.
And THEN I looked through the book It's a Wonderful Life: The Illustrated Holiday Classic by Paul Ruditis and illustrated by Sarah Conradsen, which I received as a Christmas gift from my parents. In it, I found two gorgeous illustrations of George Bailey praying on the bridge. I started playing with those ideas .... not suicide, but of praying and my children, and how would I incorporate them. And then I thought of the role bells play in the film.
I also wanted to incorporate my wife in the design, but I didn't want to include her name, because tattooing your wife's name on your body guarantees a divorce. That's just bad juju. Not gonna' do it. Some people suggested using her initials and putting "XXX Bridgeworks"  (where XXX are her initials) on the bridge as a way to include her. But then I realized her birth flower was holly. So that was easy.
But since I wear glasses and George Bailey doesn't, I had my tattoo artist bury the face in his hands instead of showing the face. That way, it is unclear if it is me or George Bailey praying. I also added a square and compasses lapel pin to represent my involvement in the Masonic fraternity.
So, you can look at this tattoo as simply a scene from the film inspired by a book made for children, or you can look at it as symbolic of me, praying over my children, represented by the bells, bridging my past to their future.
Below is the process of the tattoo. It was completed in two sessions. Session 1 was Feb. 5, 2021, which was the anniversary of my parents' wedding, and my grandfather's death (neither of which happened this year). Session 2 happened June 1. I might need to get the white touched up at some point, but that will be after swim season is over.

Posted by It Happened One Christmas Revisited at 6:18 PM 2 comments:

It Happened One Christmas Revisited 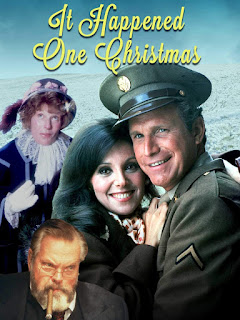 For years I have bashed the film It Happened One Christmas. And by bashed, I mean BASHED.  And for the most part, I stand by my position.

* It's a Wonderful Life should never be remade. Ever.

* If a director or a writer wants to make a film and make the female the hero of the film, I'm absolutely fine with that. Captain Marvel, Wonder Woman, and Hidden Figures are just three examples of films that focus on the female hero. Why remake an old film when you can create a whole new story in which the female is the hero? It's ridiculous to recast something old to make something new.

I have bashed this movie in the past after only one viewing (https://risefallriseagain.blogspot.com/search?q=It+Happened+One+Christmas). After a second and third viewing, I have to admit I don't hate it as much as I have in the past.

I watched it again in January, 2020, and I have to admit that I find *some* value in it. While it replicates the dialogue of the original film, and simply tries to make women equal to men through role reversal, I still find some value.

Let me clarify right here and now that my issue is not gender equality. My wife is a badass. I'm 46. My wife is 43. We had a baby a week before Christmas. My wife and my daughter can do whatever they want. We just elected our first female woman of color as Vice President. I learned a long time ago to trust a mother's instinct and not question it, which was why we were in the hospital on New Year's Day 2020 through Jan 3, 2020 for the baby, even though I thought the doctor would just tell us that it was a virus and needed to work itself out. It wasn't. The wife was right.

The town of Seneca Falls, NY is the inspiration for Bedford Falls. It is also home to the National Women's Hall of Fame. I have visited this town, and I must say that for me it is inspirational on several fronts. I'm a very liberal Democrat. I don't hide it. I'm proud of it. Empowered women make me happy. That's why I married one....a very vocal one.

It Happened One Christmas is a decent remake. It isn't great, but it isn't as crappy as the movie Clarence (1990) https://risefallriseagain.blogspot.com/2015/09/movie-review-clarence.html

Here are my issues with IHOC:

Mary Bailey is an amazing, powerful woman as portrayed by Donna Reed. Why are we challenging this? From one perspective, I can understand it: Seneca Falls is the site of the first women's rights convention and the birthplace of the women's suffrage movement. So from that point of view, I give It Happened One Christmas credit. It has the balls to stand up where other movies don't dare to speak their names. And for that, I give it HUGE kudos for making Mary Baily the focus of the film instead of a secondary character.
It Happened One Christmas is available for streaming on Amazon Prime.
Posted by It Happened One Christmas Revisited at 12:57 PM No comments:

A Tragic Death in the Family History

I want to share a family story with you.

My maternal grandmother had a history of twins in the family. Her grandmother was a twin. But her sister died at the age of 9, when she was burned to death in 1919. I never knew the details of the fire. All I knew was that there was a picture of her hanging at my grandmother's house, and that my Grandmother was named after her.

Here is the graphic and somewhat crass newspaper story of her death. I don't know what paper it appeared in, but this is how it was done back then. This account was discovered after the death of my grandmother in 2019:

Last Friday between 3 and 4 o’clock p.m., the citizens of this place were shocked by the report that, Clara, Daughter of Mr. and Mrs. Geo. Baumberger, had met with a terrible accident resulting from her clothing taking fire and later on her life.

The child had been writing a letter to her grandmother and had made a mistake in her letter and went to the stove and attempted to burn it up. The next moment the child’s mother was startled by a cry from one of her other children of, “Mamma, mama, Clara is on fire!” and turned from her work to see her daughter enveloped in a mass of flames.

The burning child started to run into another room and the mother after her, who seized a rug and threw it around the child in an endeavor to outen the flames, but the little one broke away from her mother and ran thru the house out the kitchen door, screaming. Her cries were heard by the men at work in Robinson’s blacksmith shop who immediately ran up the back stairs and found the child on the floor, her body one mass of flames. Mr. Gribbens, first on the scene, threw water on the child to deaden the fire and then with hast, stripped what remained of the burning clothes from the poor burned body and hastened for medical aid.

The child, upon examination, was found to be in a terrible condition. Her entire body was almost burned to a crisp, with the exception of a small portion of her lower limbs from her knees down, and her face. Some idea may be gained of the extent of the injuries from the fact that her fingernails dropped off and her body had to be bound so that the burned flesh would not drop off.

The little sufferer lingered until about 1:30 Saturday morning when she passed peacefully away. Mrs. Baumbeger, the mother, was severly (sic) burned about the hands and arms in trying to save her little one from the terrible fate which she foresaw was in store for her.

Clara was the youngest of the children and was born Sept. 9, 1899. She was aged 9 years, 7 months and 23 days. She leaves to mourn her loss four sisters, three brothers, father and mother.

The bereaved family have the sympathy of the entire community in this, the sad hour of their affliction.

This lovely bud, so young, so fair,
Called hence by earthly doom,
Just came to show how sweet a flower
In paradise would bloom.
Ere sin could har or sorrow fade,
Death came with friendly care
The opening bud to heaven conveyed
And bade it blossom there.
One by one the flowers are taken
One by one the roses fall,
And we carefully remember,
Pain and sorrow come to all.
A shadow o’er our life is cast;
We miss the sunshine of thy face;
Thy fond and earnest care is past,
Our home is dark without thee.
We miss thee everywhere.
A bitter grief; a shock severe;
To part with one we loved so dear.
God called her: He alone knows best.
Our loss is great, we’ll not complain,
His will be done forever
But hope in heaven
To meet again.

We desire to extend our sincere thanks to the neighbors and friends for their assistance and help during the death and burial of our beloved daughter Clara, also to the many friends for their beautiful floral offerings.

Posted by It Happened One Christmas Revisited at 4:38 PM 2 comments: