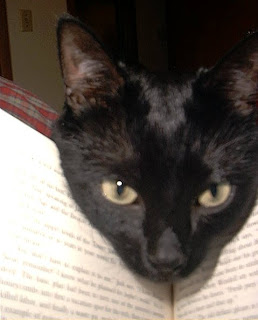 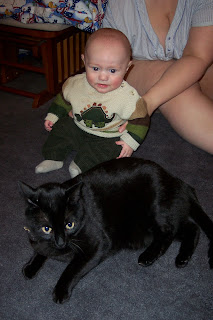 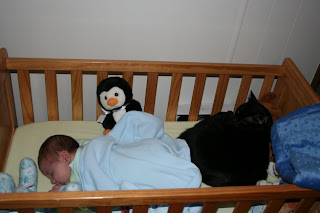 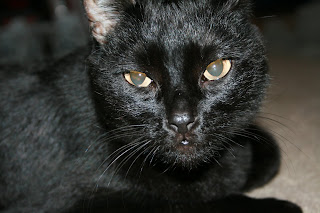 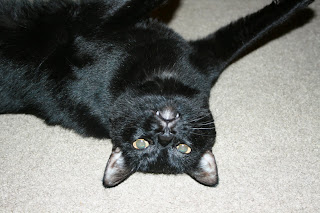 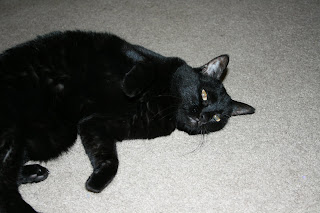 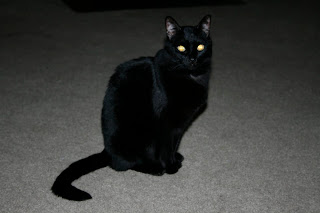 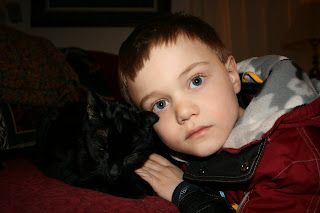 I have known many, many cats. Smiley Miss, Friendly, Bugga, Cooper, Bynx, Punkin, Belle, Loki, our new cat Mystic, and Magic.
My ex-wife and I got Magic shortly after we bought our house in 1998. Lance had Bugga, and I had wanted an indoor cat for many years. I couldn't have one in college and the apartment where we lived wouldn't let me get one, either.
And really, I need to clarify: *I* got a cat. My ex-wife was allergic to cats, but she got better as time went on, and actually went on after the divorce to cat-sit for her parents' cat long-term.
I got Magic from the Wood County Humane Society. It's where we got Mystic earlier this month, and it's where we will go again if we get another. And in reality, Magic picked me. I didn't really pick her.
I walked in and sat down on a chair and decided to see how the cats reacted to me. Magic jumped up on my lap right away and became very territorial, hissing and swiping at other cats who neared me, licking my hand and putting her head in my hand to force me to pet her. I was in love from the word go. She was 2 years old.
I called my then-wife and had her meet me at the humane society that afternoon. My initial visit was during my lunch break, as I was working that Saturday. She came up, we got the cat, and I sent the cat home with her while I finished my work day. Magic whined in the car the entire ride home, and my then-wife said she would never ride in the car with Magic again. And she never did.
When Evan was born, we were paranoid parents, afraid that Magic would attack Evan or sit on his chest and suffocate him, or scratch and bite him out of jealousy. She never did. She was very patient and tolerant and wonderful with Evan. And while I was more relaxed and less paranoid when Kaleb was born, she was just as good with him and let him yank her tail and crawl over top of her.
Shortly after Evan arrived came the divorce and feeling lost and out of control and all of that crazy stuff that goes along with the irrationality of divorce. I got to keep Magic, and we moved into a friend's house for about a year. She was always by my side, and when I was feeling down and found myself lying in bed trying to deal with it all, she was right there, snuggled up beside me. I didn't pull her up there. I never forced the issue or trapped her there. She came up with me to make me feel better.
She always did that, whether we were depressed or sick. She was always there by our sides. Even the night before she died, she had been hiding almost all day, sick herself. Evan began throwing up, and I was with him in the bathroom keeping him calm as he vomited over and over again. Sure enough, here comes Magic to check on Evan and make him feel better even as he threw up yet again. She laid down beside us on the cold vinyl floor, and she stayed there with us.
Not feeling very good myself, I went to bed shortly after Evan left. I was in bed around 6:30 at night. My stomach was rumbling, I felt like I was going to throw up at any moment, and I had other issues going on that I will not speak of here. There was Magic snuggled up against me, making me feel better just by being there.
I think that is one of the main reasons I feel so bad. Even at the end, she was there comforting us in our illnesses. But she had been sick for two weeks, and had lost more than 5 pounds, and there was nothing I could do to make her feel better.
In the end, as she was dying at age 12 years and 9 months, all I could do was apologize to her for that, and to thank her for being with me through all of the crazy, stupid shit that I have put her through in the last 5 years.
I think, in the end, as much as I love Magic, the top 5 things I will miss the most are: 1) Her in the role of Nurse Magic; 2) Waking up in the middle of the night, lying on my side with my arm sticking out beside me, and Magic snuggled up beside me, spooning on the inside with her head on my arm; 3) The security of knowing that she is somewhere in this house, even if I don't know exactly where she may be at any given moment. 4) Having her to hug when there's nobody else to hug. 5) Rubbing her belly and play-fighting with her.
Here is what Jen wrote about Magic on our family blog, which is located at http://vanvorhisfamily.blogspot.com/:
"Magic is our yellow-eyed jet-black cat. She's a science-diet crunchin', bird watchin', squirrel scowlin' (good kitty), Kaleb toleratin', loud purrin', tail-swishin' girl. She's known as Magic Marie, Magic, Fluff, Fluffer-Nutter, Kitty, Baby-Girl/BBG, Miss Magic, Popper, M&M, Doodlebug, Doodles, and probably three or four others that we've missed. She holds the title of the most nicknames in our house."
I miss my baby girl.
Posted by It Happened One Christmas Revisited at 2:59 PM No comments: