Why do I do this to myself?

In my entire life, up until about 3 years ago, I had been camping exactly three times.

The first time was at Pokagon for a weekend in Indiana in the early 1980s with the entire family: Grandma and grandpa, aunts, uncles, cousins. All I really remember is playing Sorry inside bug netting by the light of a Coleman lantern that hissed at us, fishing at the top of a dam or multi-tiered waterfall or something, getting a bunch of Garbage Pail Kids at a nearby carry-out, and having to turn around when we were about 20 minutes into the trip because we forgot something....like sleeping bags, or charcoal. I was 10 years old at the time, tops.

The second time was in Brown's Woods off of U.S. 6 between Weston and Bowling Green. It was a one-night scouting event with my dad. I remember canoeing on the tiny pond and hearing "Purple People Eater" for the first time on the radio.

The third time was at Spiegel Grove (President Rutherford B. Hayes' house) in Fremont in October, 1998 or 1999 as part of a Civil War reenactment. I remember that I was alone in the tent, and it was COLD.

What I decided during those times was that camping was not for me, and here is why: You spend two days packing a bunch of crap, shove it into your often grossly-undersized vehicle, drive for two hours, then spend the next four hours busting hump to unpack, keep the kids entertained/out of trouble, set up the tent, light a fire, make dinner, get everyone fed, get everyone around for bed, then fight the 2-year-old to actually fall asleep, which he eventually does at 1 a.m.

Then you post yourself in front of the tent fly so that when said 2-year-old wakes up at 5 a.m. full of pistons and vinegar and ready to strike fear into the area wildlife population, he can't get out of the tent without waking you up. Then you spend the day chasing the kids around, talk about seeing/doing a lot of things, then spend the next 3 hours trying to wake up because you got overheated while reading in the shade and passed out. Then you repeat the nighttime ritual, beginning at lighting a fire.

The next morning, you wake up, go to the campground church service if there is one and if that's your thing, return to camp, and spend the next 2 to 3 hours trying to keep your kids entertained and out of trouble while you strike camp. Then you have to light the fire one last time, feed the family, and put out the fire before you can leave. By that time, you are exhausted, you smell horrible (even if you took a shower every day, face it...you still stink), and all you want to do is go home.

Eventually, you actually DO get home, and it's time to relax. No, scratch that. Rewind. Start this paragraph over...

Eventually, you actually DO get home and you have to unpack all of the crap you packed up in the first place (half of which you didn't use), put it away, do laundry, put THAT away, feed the kids, get them baths and get them to bed, take a shower yourself ('cuz you still stink there, Slick), and you get done just in time to.....

Go to bed and get up at 6 a.m. to head off to work Monday morning. But your mind isn't at work on Monday. It's at home thinking of all of the stuff you could have/should have done over the weekend instead of "screwing off" camping.

Sounds like fun, doesn't it? Maybe for a masochist on par with ... well, your famous local masochist (interestingly, I Googled the phrase "famous masochists" and only came up with one name...the Marquis de Sade, who was a sadist, not a masochist...and apparently a dentist. Who knew?!).

Enter my wife Jenn, whose family has horor stories involving standing on the edge of the Grand Canyon, multiple blown tires, and topics too embarrassing to blog about.

Long story short, we now own a tent and camp regularly. Amazingly, I found myself in March wishing it would warm up enough and stop raining so we could go camping.

And all that stuff that I said about the two-year-old happened to us just recently. So did the going to work and not wanting to be there part. Ugh.

So why do I do it? There are several reasons:

2) To teach my kids that there is more to life than a Nintendo DS and sports.

3) To untether. Which is really hypocritical of me since I take my Nook and my smart phone, and was kicking myself a little for not taking at least one laptop this last weekend. But when I use that stuff while camping, it is for entertainment purposes, not for work.

5) Because when all of the work is done, it's fun to throw the ball around with the kids, have a water balloon fight, or just sit around and read.

6) To force myself to learn patience. I suffer no fools and put up with no bull. Tell that to my 2-year-old. Please. Once he gets older and goes to sleep at a rational time, I can stop telling myself that I go camping to teach myself patience, and just enjoy it. Right now, I get a headache just thinking about it. 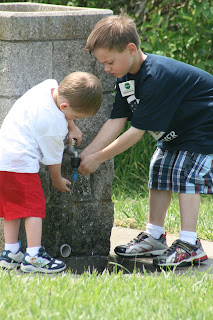 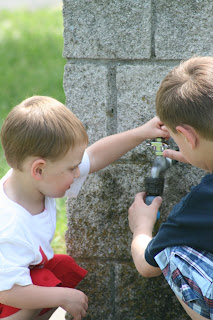 The most recent weekend was spent (as most are at this point) at Maumee Bay State Park in Oregon, Ohio. We had a lot of fun. There was some stress, like the toddler who refused to go to bed...ever; the toddler who decided it was okay to run out into the "street" several times, or hide in the tall grass (fortunately we only saw one tick this weekend, and it wasn't on anyone). But the water balloon fight was fun. The 7-year-old perfected riding his bike and started taking treks on his bike alone this weekend. I also helped him earn a Cub Scouts badge.

Jenn's parents are state park volunteers and camp there all the time. They serve as campt hosts and help keep it clean and run programming. The oldest signed up to volunteer last year to earn credit toward a Cub Scout badge. This last weekend, Jenn and I signed up to be volunteers. We will be covering for her parents as camp hosts in August while they are at a wedding or something. 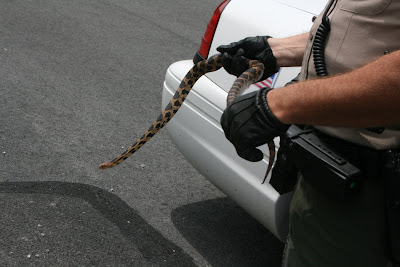 While camping this most recent outing, we also found a fox snake that was trying to get into the restrooms. We captured it and contacted a ranger. He came out and used a tool to scan it. He found a tracking tag under its skin, and measured and weighed it before releasing it in a safe location. Had he not found a tag, he would have sent it to a university so it could get one, so they could track its size and movement throughout the park.

Camping is a lot of hard work. Sometimes, it's more work and headache than the two days are worth. But between all of the hard work, there are some good memories and a lot of life lessons...and stress.

And we are already planning our next trip. I think Jenn reserved our camping spot tonight. I'm looking forward to it. I think. 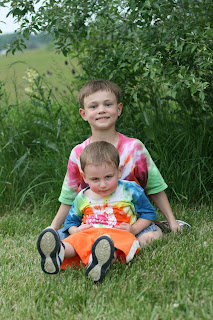 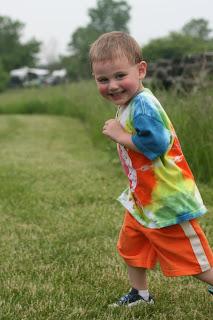 (All photos except the first three (the third was taken by Papa), were again taken by my wonderful wife Jenn. Click here to learn more about Maumee Bay State Park)
Posted by It Happened One Christmas Revisited at 12:33 PM