This entry is about our new addition, Evan's birthday, and some other stuff as I come up with it.

No, I don't mean New Edition, as in Bobby Brown's first boy band. I mean Loki, our new-but-not-so-new Siamese cat with about 132,000 lives. 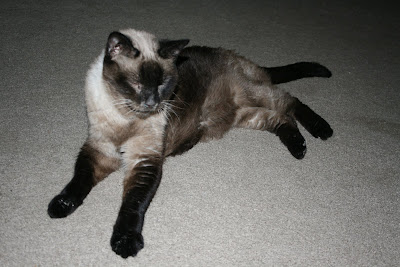 Loki was Jenn's cat, which she has had for I don't know how long. He has a constant runny nose, snores, and wraps his body around your head when he sleeps. Great cat, but pretty gross.

He has been living with Jenn's parents for at least the last four years. On Aug. 15, he got out of the house and either got hit by a car or kicked in the face by someone who doesn't like cats. Jenn, Evan, Kaleb and I were just finishing my birthday lunch at one of our favorite restaurants when Jenn's sister called and said Loki got hit by a car (the alternate theory arose later when we realized he had no further injuries except what was visible on his face.

When we got to her parents' home, we didn't know what to expect. I fully expected to pull up to a squished cat and facing the job of having to use a shovel to pick him up. Instead, we found Loki lying (and trying to get out of) a milk crate lined with bathroom towels.

He had a bloody, snotty nose, both eyes were blood-shot, one pupil was fully dilated, and he was panting. We thought his jaw as broken, but it wasn't. We took Loki to the vet, where he stayed for two days. Doc pulled him through the rough part with some anti-shock therapy and heavy-duty antibiotics.

In the final tally, Loki is blind in his right eye (which is still dilated), and drools more than he should. Doc said he has an upper respiratory infection (but he's been snotty since I first met him) and in the words of the vet, he is "making himself diabetic," which translates to "he pees about a gallon an hour."

This cat should be dead. But he isn't. So we brought him home to our house. Magic hates it. She hisses at and smacks him every chance she can get. They fight each other for bed space, food, laps and territory. Magic was so mad she actually peed and pooped on a pair of jeans I left on my bedroom floor one day last week. I keep hoping they will grow out of it.

In other business, Evan turned 6 this week and started kindergarten two weeks ago. I can't believe it. None of us can. It's crazy.

We had a small get-together at our house last weekend. He got a new baseball mitt, a new and bigger bike, a soccer ball, a Star Wars-themed educational telescope, and lots of clothes. We threw him a Star Wars-themed party and Jenn even made him a birthday cake shaped like a light saber. Very cool and creative on Jenn's part; not to mention really, really good. 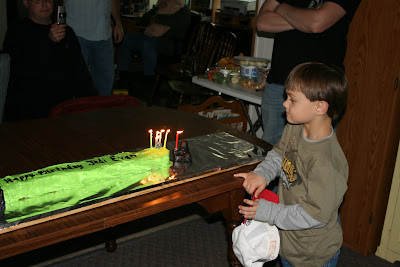 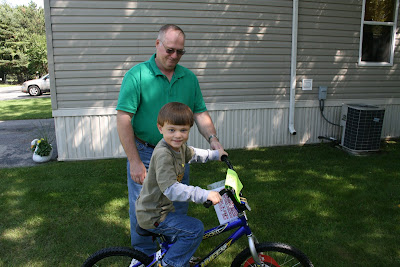 Kaleb now has 3 teeth and is working on #4. He can take bites and chews on everything, including fingers when you try to feel for new teeth. It hurts. As always, he is into everything, loves playing with everything we tell him not to touch, and gives us that "who, ME???" smile every time we tell him no. 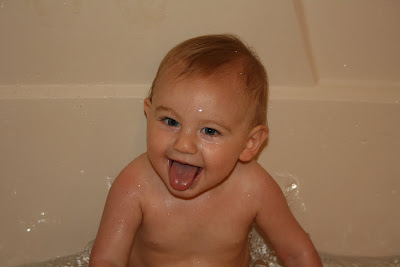 In job hunt news, I have an interview for the dispatching position on Sept. 15. The background check is over, so apparently I passed it; I knew I would. Jenn mentioned a possibility that I hadn't thought of before. There is a chance that the field of 16 might have been trimmed down due to bad backgrounds, and maybe trimmed down even further if these folks have taken other jobs at other companies.

I am hedging my bets, thought, as I found out about 3 open positions at a newspaper that is in competition with the paper where I used to work. I sent my resume and writing samples and the employee at the paper who gave me the heads-up wrote her boss a recommendation for me without me even asking her to do so.

I got another "sign" this week when the company where I work part-time eliminated my supervisor position due to the economy and finally getting a feel for how the store will perform in Bowling Green. I am not being replaced by someone else or in trouble for anything I did or didn't do. The company is just adjusting now that the pie-in-the-sky pipe dream honeymoon period is over.

The elimination of my title (and $1 per hour) is not necessarily a bad thing. If I get a full-time job, my hope is to stay there anyway, in which case I would have had to give up my supervisor title anyway. The way I see it, my schedule is opening up to make way for a full-time job coming to my near future.

At least I hope that's what it is.

So whatever it is that you do: Bow to Mecca, pray, throw salt over your shoulder, wish on a star, smoke a peace pipe, do a little dance, make a little love, get down tonight, I beg you to please do it starting now and PLEASE KEEP IT UP!!! I can use all the help I can get.
Posted by It Happened One Christmas Revisited at 3:19 PM