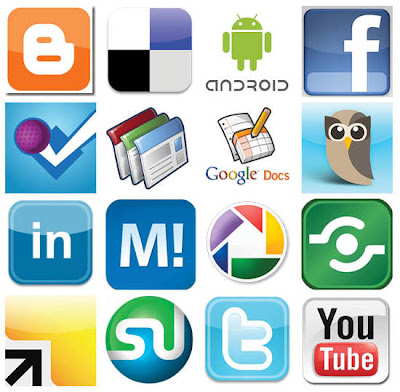 In 2006, I met my wife Jenn, and she introduced me to a Web site called "MySpace." I signed up, found about 3 people I knew and thought it would never fly. I suppose, technically, I was correct, because Facebook took over, and MySpace became a site for musicians and other artists.

I signed up for Facebook, too, but I got tired of checking two accounts and seeing the same people on both sites. So I cancelled my MySpace account and decided to just keep it simple.

Five years later, it's no longer quite as simple, but I'm having fun!!

Let's put this in perspective...

Up until two weeks ago, I had my Web site, which has existed at different addresses since 1998, a Facebook page, a Google site, a LinkedIn account, a Picasa account, a YouTube account, and sharing documents on Google Documents. Then there was the Twitter account, which I got but never quite figured out why or how to make it useful, and the blog you are reading right now.

That's all well and good, but then during the first week of May, a couple of things happened that changed my point of view about not only social media, but also how I handle my personal information on the Internet.

In early May, Jenn's second cousin (who I know mostly through family reunions and Facebook) "liked" a site called "Surviving the World." She happened to find this site through a social sharing site called StumbleUpon.

I had played with StumbleUpon a couple of times in the past, but ended up moving on instead of really locking into it. But Surviving the World changed that for me, and StumbleUpon is now on my Chrome browser toolbar, and a tool that I use daily when I am bored or have a couple of extra minutes to fool around and I don't want to get locked into a bigger project.

Then I found a handy sharing tool called Shareaholic. The site says I have been a member since August, 2010, but I don't remember signing up for it. But apparently I did. But I didn't really start using it until early May. More about Shareaholic later.

The most important event to influence my view of personal information and sharing it on social media sites occurred on May 4, when I attended the Alcohol and Drug Abuse Prevention Association of Ohio (ADAPAO) conference in Columbus for work. Having set up a Web site, blog, Twitter and Picasa accounts for work, I attended the conference looking for ways to better use social media to further our goal.

During that time, I sat in on two presentations given by Alvin Trusty, who is the Director of Educational Technology at the University of Findlay. His biggest message was that whether you intend it or not, information about you can and will be found on the Internet. His example was about a co-worker who used the Internet for research and e-mail. She used no social media, and did not put personal information online if she could help it. She was convinced that nobody could find anything about her online. In short order, Alvin Trusty found a photo of her from a High School yearbook.

That one concept changed almost everything for me. The one thing I still won't do is announce on Facebook when I am not home. That's just stupid.

Since then, I have updated all of my previously-existing social media, started blogging again (which is why I am writing this), and I have joined several additional social media sites, including the following:

And what makes all of these services so handy is that they all have apps, so you can check them on on your smart phone while you are on the road.
Not only that, but most of these services link to your Shareaholic account. So when you find a site you like, you click the Shareaholic button, and you can share the site through most of these servies.
In addition to that, I also began listening to podcasts again, specifically The Dave Ramsey Show, and CNet's Buzz Out Loud, which is a technology podcast. And my Android phone automatically downloads these, so i can listen to them wherever and whenever (I'm listening to Buzz Out Loud episode 1472 as I write this).

I also connected to Mashable to follow and comment on social media news.
The point to all of this is two-fold. First of all, control your information. The more services you sign up for, and the more sharing you do on each, the more you can control what others see when they type your name into a search engine. Second of all, you never know if you can use something unless you try it out. I came close to NOT using FourSquare due to home security issues. But since I can control the settings, I decided to give it a shot. Will I keep using that or Springpad? I have no idea. But I'm giving both a try.
So go out there. Explore the world. Use the knowledge of others to expand your own. There are some great tools out there. You just have to find what works best for you. Enjoy!

And while your at it, check out my social media sites. The links are at the right. -->

So tell me...what are YOUR favorite social media outlets? I probably have room in my life for a few more!

As for me, I am going to see what I can StumbleUpon.
Posted by It Happened One Christmas Revisited at 8:18 AM