In my book reviews, I give my brief thoughts on what I read. Sometimes I will expound on those thoughts, but more often than not, I will just give a brief opinion. You can read plot descriptions on Amazon.


Since I established in my last blog entry that To Kill a Mockingbird is connected to It's a Wonderful Life, it stands to reason then, that the prequel to Mockingbird is naturally connected as well. 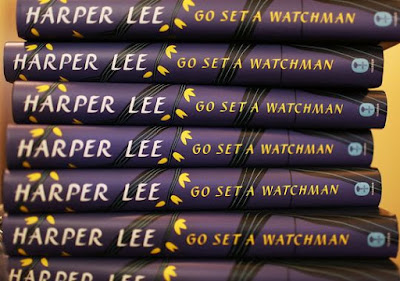 The title of Go Set a Watchman is taken from Isaiah 21:6, which says, "For thus hath the Lord said unto me, Go set a watchman, let him declare what he seeth."

That's what the King James version of the Bible says, anyway. The New Living Translation is more accessible, saying "Meanwhile, the Lord said to me, 'Put a watchman on the city wall. Let him shout out what he sees.'"

Originally, I was surprised that there is no sign of Boo Radley anywhere. in Watchman. Originally, I thought that maybe that was because the books were written out of order and Boo hadn't been created yet. However, I soon realized that this idea was wrong, because after Boo's heroism in Mockingbird, Scout walked him home and said she never saw him again.

Some facts have changed from the original story, especially concerning the outcome of Tom Robinson's trial. There has been a lot of talk about how Atticus is a different person than he was in To Kill a Mockingbird. And to some degree, that has merit. On the other hand, however, this perceived change in Atticus is the entire driving force behind the story.

Watchman is a book about childhood perceptions, reality and getting a dose of said reality. It's about grappling with what appears to be a change from what you thought you knew in childhood. In many ways, this is a story about growing up, just as much as Mockingbird was. And Scout is still growing up.

It helps to keep in mind that even though this book is a sequel, it was written prior to Mockingbird. That means that the Atticus we have known and loved until this book came out was written with the author's full knowledge of how he "really is." For me, that is a game changer. Atticus hasn't changed. There has just been more about him that has now been revealed, and his character has simply become more complex and deeper because of this new/old book. That's a good thing.

Readers who give Watchman one star on Amazon and Goodreads all seem to be freaking out that Atticus isn't who they thought he was. What they tend to forget is that it isn't about them. Both books are told from Scout's point of view. It is her perception that counts. Atticus didn't change. Scout's awareness of the world, and her ability to read people and understand her surroundings changed. It matured. It became more nuanced.

It makes complete sense that Atticus Finch can defend Tom Robinson in Mockingbird, but is a member of a racist group in Watchman. Public defenders do it all the time in 2015 - they defend the accused because it's their job, not because they believe in the goodness in the heart of a murderer caught in the act on a security camera. "Your honor, I don't know this man, but I sincerely believe he is a loving, caring, kind, thoughtful man who wouldn't hurt another human being. This surveillance video of him hacking away at his wife with a  meat cleaver is clearly a Hollywood production designed to falsely incriminate my client."

Bologna. Atticus Finch took Robinson's case because he was ASSIGNED to take it. He didn't volunteer for it. He wasn't approached by the family. He was assigned the task by a public official who had manners and disguised the assignment as a request. That's what good leaders do. My boss asks me, "could you please complete this report for me," and that empowers me because I feel like I am in control. He could just as easily tell me "complete this report for me." Either way, the exact same job gets done. The difference is that one is a polite, respectful request. The other is a heavy-handed command designed to put someone in their place. Atticus did not choose the Tom Robinson case. He was assigned to it. And even then, the outcomes are different, depending on which book you read.

Go Set a Watchman challenges everything we know. It challenges my northern perception of southerners. It asks questions that are difficult to answer, and it looks at issues I didn't even know existed in the south at that time. There are many, many quotable moments. It is definitely a book I will reread in short order.

Just do yourself a favor and when it gets offensive (and it does), don't forget to stop looking at it through politically-correct, hyper-sensitive 2015 glasses. Take a step back, remember that this book was written in the 1950s ABOUT the 1950s, and keep some perspective.

For me, Mockingbird gets 5 stars. Watchman gets 4, mainly because throughout the book, Lee would switch from first person to third person and back again in the same paragraph. That was distracting.

Posted by It Happened One Christmas Revisited at 8:40 AM