It's been a couple of crazy Photo Fridays. Last week, I dropped the bell theme in order to pay tribute to my Grandpa Van Vorhis, who died July 21.

This week, I return to the bells on Photo Friday, this time paying tribute to my other grandfather and his father. But it can't be that easy, or I wouldn't be me. My unintended motto seems to be "take something simple and make it insanely difficult." So in true form, I am posting this Photo Friday on Thursday. Because it naturally makes sense, of course.

The real reason is that I have special posts to run on both Friday and Saturday. So in the name of the Greater Good, here is Photo Friday, on Thursday....

This week's topic is my Great-Grandpa Lance's school bell. My Great-Grandfather, who was bit by a raccoon and died of rabies (that's the simple version of the story), was a teacher. Somewhere in a box, I have stored away some of his old teaching books, including a really cool, old copy of Evangeline. My Grandpa Lance received and displayed his teaching bell, and when he died, Grandma kept it on display. On Sunday, it was passed down to me, and I am pleased to receive it. Check it out, then read more below! 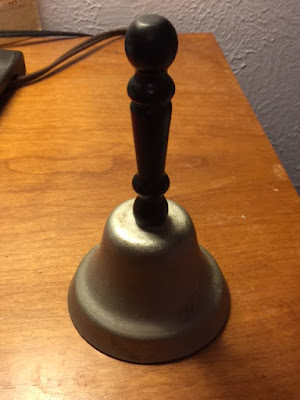 So while I was at Grandpa Van Vorhis's visitation on Thursday, I finally learned which house my Grandpa Lance was born in. I always knew what street he was born on, but I never knew which house. It was a short street, and there were only like 12 houses to choose from. My mom always told me it was a brick house, so that cut the options down to two.

It turns out my mom was wrong....it wasn't a brick house. The Commodores would be disappointed. But it turns out that one of the brick houses that I originally thought he was born in was actually once the home of a Civil War drummer. I learned all sorts of things at my Grandpa Van Vorhis's visitation and funeral.

My Grandpa Lance was actually born in another (not brick) house on the opposite side and opposite end of the street. He was born in THIS house:

Posted by It Happened One Christmas Revisited at 7:32 AM