News Clips Part 1 - Why I Love It's a Wonderful Life

In its heyday, it was a GREAT paper. The staff had been there for a long, long time, we all got along. When I was laid off in 2009 during the economic rug-out-from-under-all-of-us suck years that was a death knell for newspapers as they had been since the invention of the printing press, I had the lowest seniority in the office....with 12 years of service. Technically, that was not true, since there were sports writers who were newer than me, but of course, sports are on their own special little platform, taking up 1/4 of the entire paper at that time, and were "held harmless." Whatever.

Recently, the publisher allowed the Second Amendment to trounce all over the First Amendment, and there has been a lot of deserved negative fallout from that, as it became a national story.

Anyway....back when the Sentinel was great, I wrote this story. Click on the image to make it larger so you can read it. 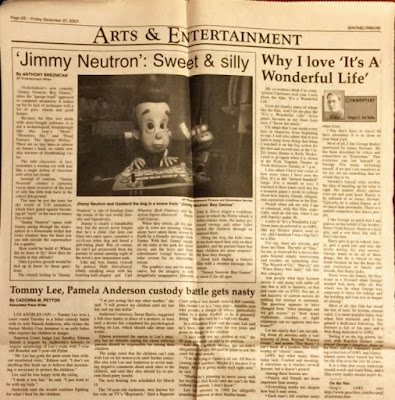 Posted by It Happened One Christmas Revisited at 10:43 AM