I caved: Meet our menagerie

My last two posts have been about why I disappeared for the last year. I told about my diagnosis of possible Multiple Sclerosis, and I told you about how we bought a house and moved (check them out). Another big life change for us this year as the result of the move, my wife's constant nagging, and my spineless caving.

I hate dogs. We have (had) two cats that hate dogs. My wife and I both grew up with cats and love snuggling with them at bedtime, with their comforting purr as a gentle soundtrack for sleep. But I hate dogs. I hate cleaning up their poop. I hate cleaning off their paws when they go outside in the rain and mud and snow to take their crap. I hate yippy dogs that bark at the wind and tear up your stuff.

I had a dog when I was a kid. Dumbest dog ever. Open the gate, he ran away. Off like a shot. Never got to play with him. He just ran away and showed back up a few days later. It was depressing. My dad had a few guard dogs at his business. Jaws, the Doberman, was awesome. One of dad's employees had to carry a lead pipe with him around the dog. He never hit the dog, but if he didn't have the pipe, the dog would attack him. I would play with the dog all of the time. He also had a German Shepherd named Shadow. Also an awesome dog.

But it still didn't change my outlook on cleaning up poop and constant barking for no reason.

Then we bought the house, which my wife took to mean that we were going to get a dog. She started begging. That annoying, constant, chip away at your soul begging. She started sending me pictures from adoption pages of dogs she wanted. One day in late August, I couldn't take it anymore and like a spineless jellyfish, I imploded.

"Good," she answered. "I already made an appointment to see one on Saturday.

So Saturday, September 3 comes around and we get the kids in the car. They are clueless. We didn't tell them what we were doing. We go to visit the dog, and I immediately fall in love, but I keep up my hard-ass I hate dogs appearance because that's what I do. She doesn't jump or run away or bark or freak out or bite. She's just chill.


We didn't consider any other dogs. Love at first sight, I guess. Her name was Abby when we got her. We decided to rename her. We tried Zuzu, from the character in It's a Wonderful Life, but after a couple of days, we realized it didn't fit her. So we tried Bailey instead, after the Bailey family in the same film. It stuck. And the best part about it is that I don't have to pick up the dog poop in the back yard. That was my only requirement. I clean the cats' litter boxes. Everyone else can clean up the dog dookie.

So our growing pet family count was 1 dog and two cats. Apparently it wasn't enough. Someone posted on one of those Facebook sales sites that she had found a siamese cat that someone had lost, and she couldn't find the owner. I made the mistake of telling Jenn about it. I should have known better than to tell someone who desperately wanted a siamese where to get one for free. I didn't even have time to blink. Within hours, this emaciated cat was at our house. He has since gained 6 pounds.

Now we have 3 cats: Missy (short for Mystic), Maisey (because she was found as a kitten in a corn field), and Merlin (because Jenn decided to stick with the magic-themed M names).

Enough. I'm done. Maybe someday we'll get a rabbit or an iguana or a domesticated fox. But for now, this zoo is closed.

And for what it's worth, as much as I despise dogs, I sure do love Bailey. But don't tell anyone. 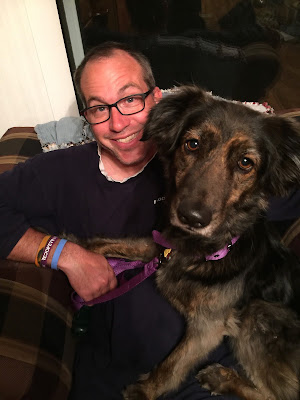 Posted by It Happened One Christmas Revisited at 2:32 PM