Here is another box that was damaged by a leaking hot water heater. The building was undamaged.

The side of the box is not entirely correct, but it reads: "Set just across from the Bailey Brothers Building and Loan, the Bijou is the town movie house. Kids flock to its triple-feature matinees and boys their their favorite girls there, hoping to steal a kiss. When George Bailey yelled 'Merry Christmas' to it one fateful Christmas Eve, its marquee beamed the title of another holiday classic, 'The Bells of St. Mary's.'"

The Bijou was not, in fact across the street from the Building and Loan, Instead, it was in the neighboring block, next to Gower's Drug Store. "Interestingly, 'The Bells of St. Mary's'" is a wonderful film starring Henry Travers, who plays Clarence in 'It's a Wonderful Life" as a Potter-like character named Horace P. Bogardus. 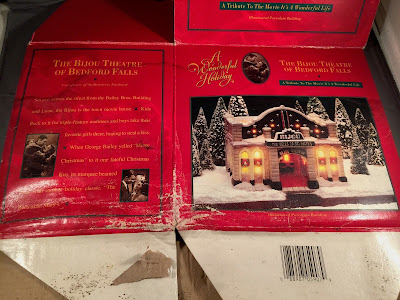 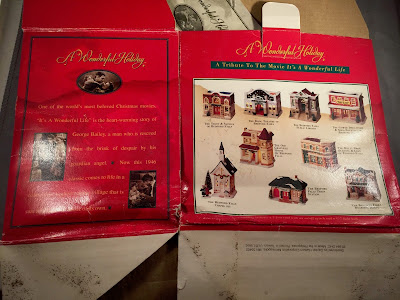 Posted by It Happened One Christmas Revisited at 6:58 AM